Skip to main content
The National Shrine of Saint Jude is located in an annex to the parish church of Our Lady of Mount Carmel at Faversham. The development of Faversham into a centre of devotion to St. Jude arose out of the work of the Carmelite Press.

The Press was founded in 1938 to print materials sent out to clients who, by their donations, supported the work of the Carmelite friars, then only recently re-established in England after a gap of four hundred years. The Press also printed a newsletter, Carmelite News, which kept supporters of the friars in touch with their developments at Faversham and across the country. Carmelite News became an important communication link between the Order and its supporters.

An edition of Carmelite News from 1954

The work of Carmelite News and the Carmelite Press was supervised by the parish priest of Faversham, Fr. Elias Lynch, O.Carm., who along with his brothers Malachy and Kilian was influential in the refounding of the Carmelite Order in Britain. 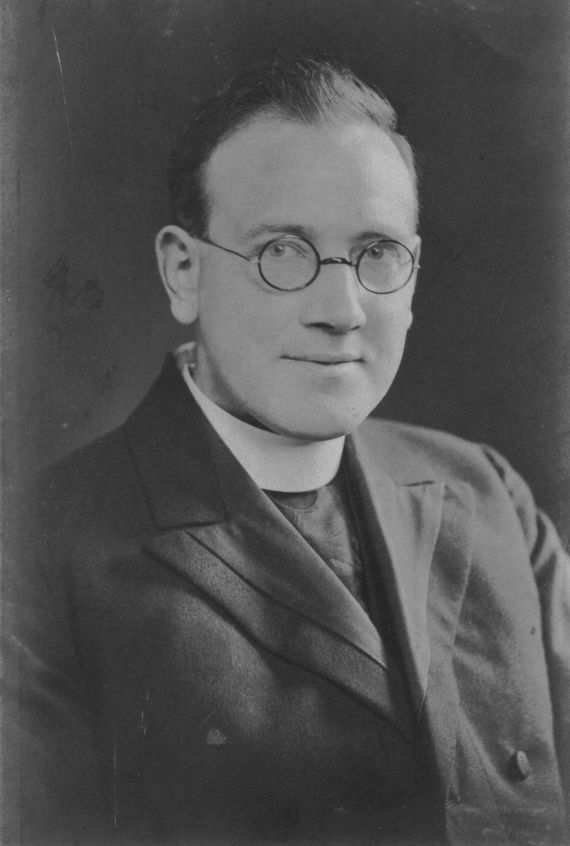 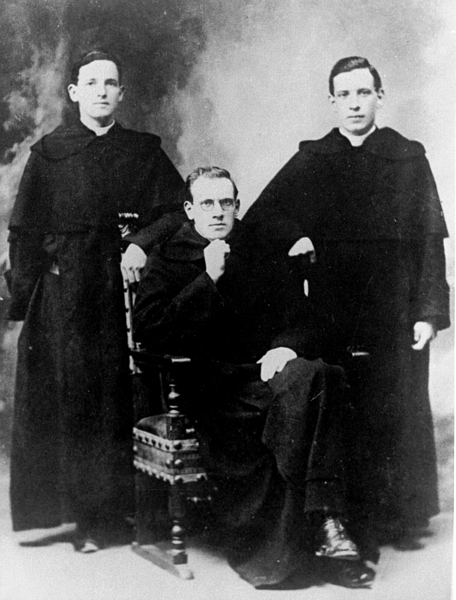 In the early 1950s Fr. Elias received an increasing number of requests from readers of Carmelite News for prayer cards of Saint Jude. Having distributed such a card, donations to "The Shrine of Saint Jude" and requests for prayers started flooding in. Such a shrine did not exist, but perceiving the need Fr. Elias quickly developed a place of prayer and devotion to the Apostle Jude alongside the parish church in Faversham.

On 28th October 1955, the Bishop of Southwark Cyril Cowderoy, assisted by the Prior General of the Carmelite Order, the Prior of Aylesford, and many other priests and religious, dedicated the Shrine of Saint Jude. Bishop Cyril described the shrine as "a jewel for the diocese".

Father Elias was ably assisted by Brother Anthony McGreal. You can read Father Wilfrid's article about his uncle, here. 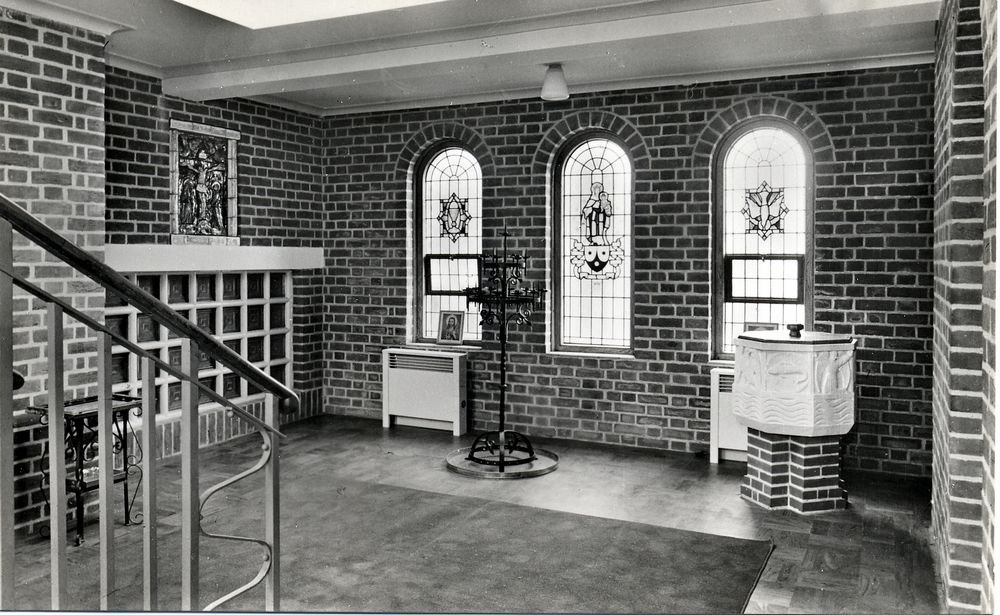 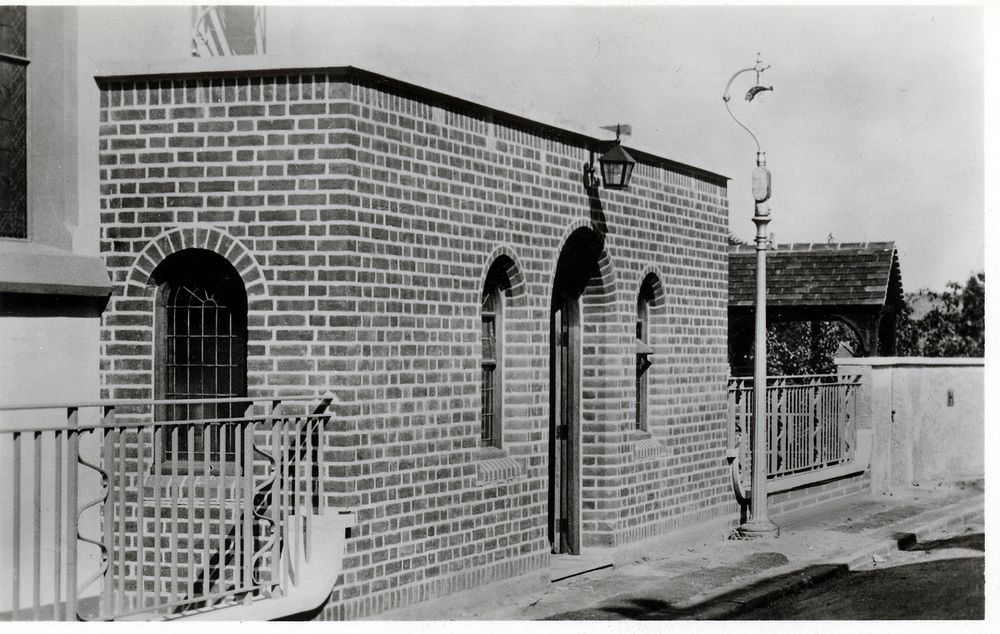 Views of the Shrine shortly after its construction.

Fr Elias, who had been in charge of Faversham for many years, had been the prime mover in the erection of the shrine, and he recorded his reflections on it at the time:

"I did not know much about the devotion to St. Jude when I started producing religious pictures. They were the usually accepted ones - the Sacred Heart, the Immaculate Conception and so on - in black and white, not very good, nothing original. In fact, we were rather ashamed of them. Printing is a peculiar job. You produce a whole page of print and then you feel you ought to lighten it up a little bit. So, you put in a picture. We had rotten paper during the war. Anyway, we produced black and white pictures of the saints, in connection with the Novenas we sent out during the year.

Once you start producing religious pictures, people get the idea that you are unlimited in your range. They think that you can supply any religious picture they like to name. Our great trouble was St. Jude; the Apostle and Martyr; patron of hopeless cases. People used to write to us and say, "Have you got a picture of St. Jude?" Now, that poses a difficulty. He, or she, is a well meaning religious person. If you haven't got a picture of St. Jude, you have to write back and say "No". That means a personal letter and costs 3d. It involves personal correspondence. In the end, we decided that the only way out was to print a large number of pictures of St. Jude and send them out to everybody. I found an old German picture of St. Jude with a club big enough to murder anyone, and I reproduced a quarter of a million pictures of St. Jude and his club, with prayers in honour of St. Jude, and sent them out broadcast to all who called on us.

The war ended. We got building plans, and started work. After two years - it is there.

The Faversham statue of St. Jude turned up in a peculiar way. A man wrote to tell me that his wife was depressed and sorely afflicted because her son had been lost at sea in the submarine war. He asked me to pray to St. Jude that God would give her patience, resignation and fortitude. This we did. I wrote to him to say that we did not have a good statue of St Jude and he wrote back to say that he had seen one in an antique shop in London, Spanish 16th century. Could he donate it to the Church? Of course I said "yes" and down it came. It certainly looked like an Apostle, but it was the most Mongolian looking statue I had ever seen. There was an element about it that was quite impressive and the artist had not spared either his time or labour in the carving. The donor asked me to put a little plaque under it, asking prayers for his son lost at sea". I said to him, "It is a little too soon yet. Wait a while." Sure enough, ten weeks later the son turned up as a prisoner of war on a captured German sea raider. The plaque was never put up.

Adam Kossowski has done the ceramics; and they are lovely. Anthony Foster, who in England is the finest Catholic artist in sculpture, has done the Twelve Apostles. Michael Leigh has excelled himself in eight pictures. St. Jude may be the forgotten Apostle, but he is at the same time a common meeting ground between Anglicans and Catholics, on a devotional level. He was not in pre-Reformation days much identified with the old Catholic life in Europe. He was a forgotten saint."

There is a sad footnote to the circumstances surrounding the statue of Saint Jude. As Fr. Elias recounted, the donor's son presumed lost at sea was later found. However, in the subsequent course of World War II that young man and one of his brothers died as members of the Merchant Navy. In 2015, at the Diamond Jubilee of the Shrine, a surviving son, Mr. James Murphy, was present at the National Shrine celebrations to see in place a plaque that reads: "This statue of St. Jude was donated by Michael Joseph and Mary Bridget Murphy of Hythe, Kent, in memory of their sons Matthew and Michael who died on active service in the M.N. during World War II. R.I.P."

The former murals
Destroyed by a fire at the Shrine in 2004, there were once eight mural panels in subdued fresco colour and tone, painted by Michael Leigh. The theme was "Great Visionaries and Mystics".

This photograph of the inner shrine area in the 1950s shows the former murals.

The panels were in oil and finished in dry tempera which gave a very pleasing pastel effect. These pictures were done in the mood of El Greco, the great Spanish mystical painter. El Greco gave to his saints a length beyond the normal, in order to heighten the effect. Moreover, he was the artist of strong light and shade. His brush was fierce, clear and uncompromising. The paintings included:

ST PAUL on the road to Damascus. He shades his eyes with his arm as if to keep out the revelation of God. "Saul, why persecuteth thou me?" That was the striking note of a universal Church, because in him God chose a travelling man. THE REPENTANT PETER. A wonderful study of the Prince of the Apostles, humble and in disgrace; the cockeral as his undying reminder. No crossed keys; that was to come later. ST JOHN OF THE CROSS. The great Spanish poet and mystic, whose poetry will live on, as long as people can read. "In the evening of life you will be judged on love." ST TERESA OF AVILA. The foundress of the Discalced Nuns. The Interior Castle was depicted on the top left.