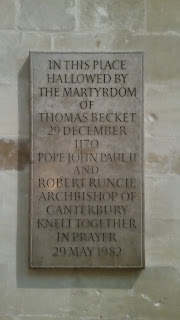 One of the many advantages of visiting the Shrine of Saint Jude in Faversham is that pilgrims have additional opportunities to add to their Christian experience after a visit to us. This article is going to include a semi-regular look at some of the pilgrimage sites you can visit whilst down here – the Shrine of Saint Jude can then simply be the start; middle or end of your pilgrimage.
Before, I carry on, I must not forget to mention, our very own peaceful and beautiful sister-shrine at Aylesford. We will be returning to Aylesford at some point, but I suspect that most of our blog readers are already very well aware of our sister-shrine, so I wanted to discuss some other places of pilgrimage first.
First up: Canterbury Cathedral in Canterbury. The city is easily reached from Faversham – either by train, bus or car – or like I did once upon a time – you can walk. It is the closest city to Faversham and the grandest. For many centuries, Faversham was part of a pilgrimage route to Canterbury – and many a king passed through our special town on their way to Canterbury.
The city is a popular tourist destination: consistently one of the most-visited cities in the United Kingdom.
Canterbury has been occupied since Paleolithic times and served as the capital of the Celtic Cantiaci and Jute Kingdom of Kent. Many historical structures fill the area, including a city wall founded in Roman times and rebuilt in the 14th century, the ruins of St Augustine's Abbey and a Norman castle, and the oldest extant school in the world, the King's School. Modern additions include the Marlowe Theatre and the St Lawrence Ground, home of the Kent County Cricket Club. There is also a substantial student population (Fr. Wilfrid McGreal, O.Carm - Prior at Faversham was a student at the University of Kent, Canterbury, as was I!). 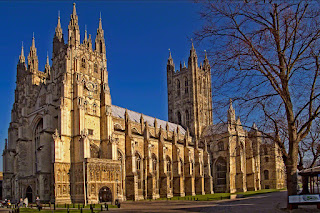 Founded in 597, Canterbury Cathedral was completely rebuilt from 1070 to 1077. The east end was greatly enlarged at the beginning of the twelfth century, and largely rebuilt in the Gothic style following a fire in 1174, with significant eastward extensions to accommodate the flow of pilgrims visiting the shrine of Saint Thomas Becket, the archbishop who was murdered in the cathedral in 1170.
This was a pivotal moment in the history of the cathedral, when the archbishop, St Thomas Becket, was murdered in the north-west transept (also known as the Martyrdom) on Tuesday, 29 December 1170, by knights of King Henry II. After his martyrdom, pilgrims flocked from miles around to visit the Shrine of St Thomas Becket – including King Henry II. Fictional pilgrims are portrayed in Geoffrey Chaucer's Canterbury Tales.
Unfortunately, the shrine was destroyed in 1538, during the Dissolution of the Monasteries, on orders from King Henry VIII. The king also ordered that Becket's bones were to be destroyed, and ordered that all mention of Becket’s name be obliterated.
Nevertheless, and fortunately, King Henry VIII failed to obliterate his name or interest in St Thomas Becket.  As such, for the modern day visitor, it is possible to visit a candle which marks the place St Thomas Becket’s shrine was situated (with some stunning windows behind). Surrounding the Shrine is the tomb of King Henry IV and his wife; and the Black Prince. 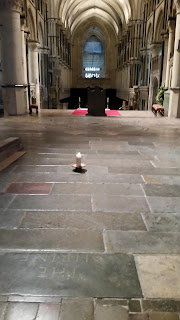 It is also possible to visit a modern sculpture marking the spot of St Thomas Becket's martyrdom. It was installed in 1986, and the dramatic sculpture represents four swords for the four knights (two metal swords with reddened tips and their two shadows). The design is the work of Giles Blomfield of Truro. 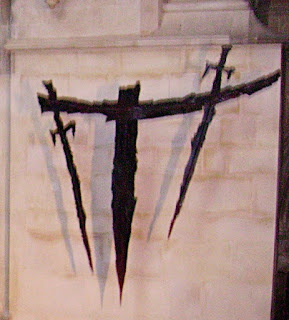 Before the sculpture was installed, Saint Pope John Paul II knelt and prayed with the Archbishop of Canterbury in 1982 and a plaque (see above) can be seen here.
In addition to places associated with Saint Thomas Beckett, the visitor can see the tombs of King Henry IV of England; the great medieval hero, the Black Prince; and various tombs of some Archbishop’s of Canterbury - plus much more. As a small aside: King Henry IV's son, King Henry V had two Carmelite friars as confessors during his reign: Stephen Patrington and Thomas Netter.


Canterbury Cathedral is one of the most beautiful places to visit for prayer and peace – we highly recommend a visit if you are in Faversham. Please do let the Cathedral know that you were at the Shrine of Saint Jude - and they will let you in as pilgrims. I always think it very surprising (but often very true), how peaceful cathedrals are - and they serve as a great opportunity to be proud of our Christian heritage.

Next time on this blog, I will be writing about Saint Augustine’s Abbey, once again in this great city and another important pilgrimage site.

Let us pray (taken from the Roman Missal):

O God, for the sake of whose Church the glorious Bishop Thomas fell by the sword of ungodly men: grant, we beseech Thee, that all who implore his aid, may obtain the good fruit of his petition. Through our Lord Jesus Christ, Who livest and reignest with Thee in the unity of the Holy Spirit, forever and ever. Amen.
Matt Betts, Shrine of Saint Jude
Photo of Canterbury Cathedral is from Wikipedia; all other photos taken by Matt Betts.