The complex of buildings in Faversham on the site known as "Whitefriars" consists of:

Who are the Carmelites?
The Carmelite friars (brothers) are known as "Whitefriars" because of the white cloaks they wear as part of their religious habit for religious occasions. The Carmelite Order started with a group of hermits living on Mount Carmel in the Holy Land. Sometime between 1206 and 1214 they asked Albert, the Latin Patriarch (Roman Catholic Bishop) of Jerusalem for a Rule, or way of life, to follow. In 1242 they were driven out of the Holy Land by the Saracens, and came to Europe. One group settled in Hulne, near Alnwick in Northumberland, and another at Aylesford in Kent. There were Carmelites in this country from that time until the Reformation. The Carmelites came back to England in 1926, and took over responsibility for the parishes of Sittingbourne and Faversham in the southern English county of Kent.

The Carmelite friar community at Faversham consists of the Prior of the house (senior brother of the community), the Parish Priest of the Church, and Shrine Chaplain. 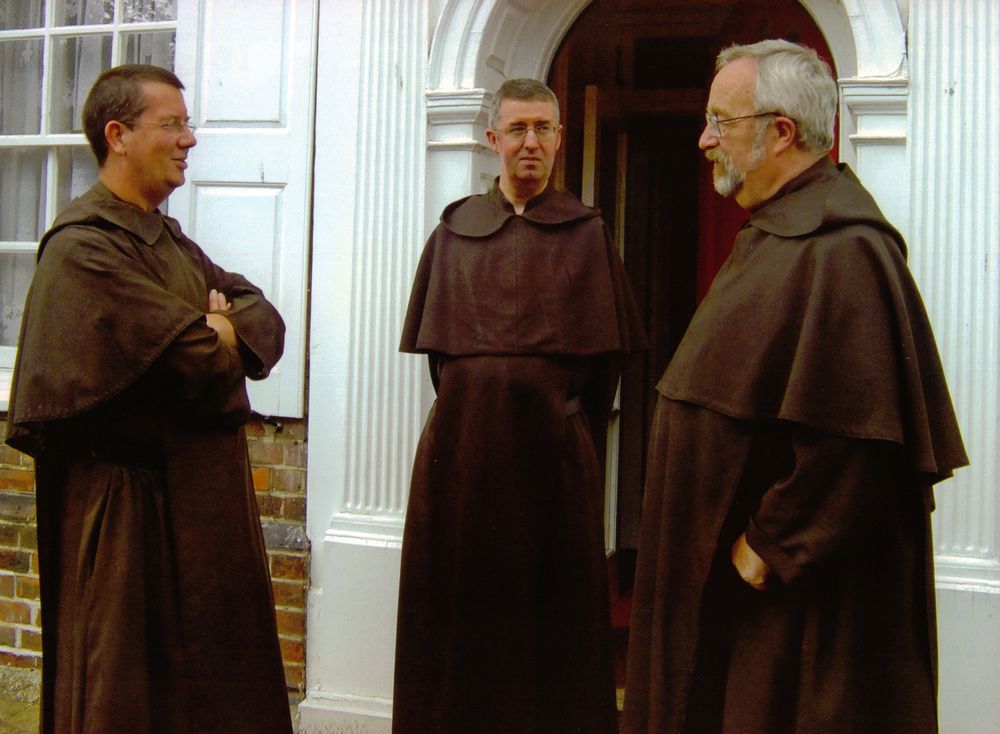 Friars outside the Carmelite community house at Faversham.

There are also a number of lay members of the Carmelite Order active in the parish at Faversham.

The Church
The Carmelite friars serve the parish of Our Lady of Mount Carmel in Faversham.

Parishioners worshipping in the parish church.

The present church was opened in 1937. The building that is now the Church of Our Lady of Mount Carmel has had a chequered history. It was built by William Hall in 1861 as a Quaker school, which explains its church-like appearance. Faversham was the centre of a gunpowder making industry that was largely controlled by Quakers. The directors and foreman of the company were Quakers and they built a school to give their children a religious education in accordance with their beliefs. The original layout included a courtyard under the building, now enclosed to form the parish hall (Carmel Hall). On the outside of the pillars supporting the building (now the wall of the Hall) on the North, or car park side, can be seen the grooves and marks where the children used to sharpen their slate pencils.

What happened to the Quaker school? The school continued in being until 1907 when the girls moved to amalgamate with a boys' school and so form a new school in new premises (The Ethelbert Road Council School). During the First World War, on 2nd April 1916, there was an enormous explosion in the local powder works down on the marshes. The gravestone of some 150 victims of the tragedy can still be seen in the local cemetery, where they were only afforded a communal grave. When the war was over, powder making moved north into Scotland. In 1910 the building was acquired by East Kent Cinemas, and after some alterations opened its doors as the Empire Picture Hall. The screen occupied the place of the main windows in the Church, and the projection shed was in the garden behind the present Calvary. Eventually a new cinema was built in the centre of the town and the building became vacant in 1936.

Brother Anthony McGreal, O.Carm., (d. 1965) who for over 30 years
helped to develop the Carmelite presence at Faversham.

The old church, until its demolition in 1963, served as a chapel for the Convent (Plantation House) from which the Notre Dame Sisters conducted a primary school. The cost of the house and the redundant cinema was a mere £900, and so the new Church and Priory of Faversham came into being. That is not to say that the Catholics of the town liked it. They thought that Tanners Street was a bit down market as an area, but as time went on they began to see more sense in the proposition.

The Priory
The fine Georgian house next door to the church is the priory where the Carmelite friars live. Known today as "Whitefriars", it is the oldest building on the site and rated as an ancient monument. It stands on the steep slope that drops from the level of Tanners Street down to the banks of the West Brook (on which stand the Shrine office buildings, the Shrine Information Centre, the Shrine Welcome Centre, the remains of an orchard and the car park).

The entrance to 'Whitefriars', the friar community house.

From the deeds of adjoining properties it appears that the house was built about 1740 by John Gilbert, who died in 1746. He was a tanner by trade, so the name of the street is no misnomer; evidently his business was prosperous to afford such a splendid new home. His tan yard, it seems, was originally where the church car park now is, but was moved elsewhere, and the site became a kitchen garden. The house was extensively remodelled inside for use by the governesses (teachers) when the School (now the church) was built in 1861, but outside remains as it was. It is built to a plan. A good, spacious, well lit sitting room in front, with a small bedroom at the back. It is interesting to observe that for sleeping purposes, school teachers, in those days, did not require much cubic space.

Parish Hall (Carmel Hall)
Underneath the forecourt leading to the house is a vaulted space that used to be a sort of armoury for the local musketry school. It was later devoted to the more peaceful pursuit of making habits for the friars, and Brown Scapulars for members of the Brown Scapular Confraternity. In 2005 it was renovated to serve as the parish hall and is used for a wide variety of activities and local groups.

The Press was founded in 1938 to print materials sent out to clients who, by their donations, supported the work of the Carmelite friars, then only recently re-established in England after a gap of four hundred years. The Press also printed a newsletter, Carmelite News, which kept supporters of the friars in touch with their developments at Faversham and across the country. Carmelite News became an important communication link between the Order and its supporters.

An edition of Carmelite News from 1954

The work of Carmelite News and the Carmelite Press was supervised by the parish priest of Faversham, Fr. Elias Lynch, O.Carm., who along with his brothers Malachy and Kilian was influential in the refounding of the Carmelite Order in Britain.

In the early 1950s Fr. Elias received an increasing number of requests from readers of Carmelite News for prayer cards of Saint Jude. Having distributed such a card, donations to "The Shrine of Saint Jude" and requests for prayers started flooding in. Such a shrine did not exist, but perceiving the need Fr. Elias quickly developed a place of prayer and devotion to the Apostle Jude alongside the parish church in Faversham.

On 28th October 1955, the Bishop of Southwark Cyril Cowderoy, assisted by the Prior General of the Carmelite Order, the Prior of Aylesford, and many other priests and religious, dedicated the Shrine of Saint Jude. Bishop Cyril described the shrine as "a jewel for the diocese".

Views of the Shrine shortly after its construction.

The buildings which house the shrine office, welcome centre and shrine information centre were built between 1935 and 1960.

Today, we have in Tanners Street a pleasant little church, a fine Priory and garden, as well as the National Shrine of Saint Jude.